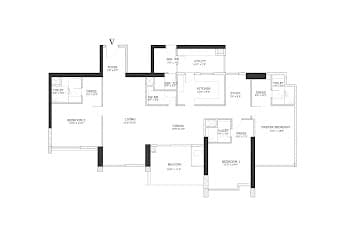 All calculations are estimates and privided for informational purposes only. Actual amounts may vary.

Total
In the supremely dynamic and competitive sphere of property development, Mantri Developers has consistently been a trailblazer, setting the trends for others to follow in India. Established in 1999 by Mr Sushil Mantri, Mantri Developers Pvt. Ltd. is an innovation-led, future-focused real estate company. It has been the pioneering force behind the rapidly changing skyline of South India, with developments that span the residential, retail, commercial, education and hospitality sectors. The group, with the spirit of innovation at its core, has carved a niche for itself as an industry benchmark for its quality, customer focus, robust engineering, in-house research, uncompromising business ethics. Today, it ranks as one of India's most preferred real estate brands in south India. Mantri Developers is committed to developing ecologically sustainable projects, with a strong emphasis on environmental management and safety standards. Mantri is also credited for changing the commercial office space landscape with a host of premium & ultra-modern complexes. What sets the company apart from the rest is the sharp vision, based on enduring values such as Punctuality, Quality, Reliability, Speed and Transparency (PQRST), and superior execution capability. It uses cutting-edge technological innovations such as home automation systems to complement the state-of-the-art architecture of its smart home projects. Known for its pioneering innovations, the Mantri Group is the first realty company to have launched the 'Digital Interactive Mannequin' and adopted the 'Augmented Reality' tool to engage customers. The Group reflects exceptional passion, commitment and expertise through its projects and style of work. Out of so many landmark retail projects, Mantri Developers has created one of South India's most prominent and one of the largest malls in the country 'The Mantri Square' in Bengaluru. Mantri Glades, Mantri Alpyne, Mantri Tranquil, Mantri Lakeview, Mantri Astra are some of the residential projects delivered by the Group.'
Talk to Agent